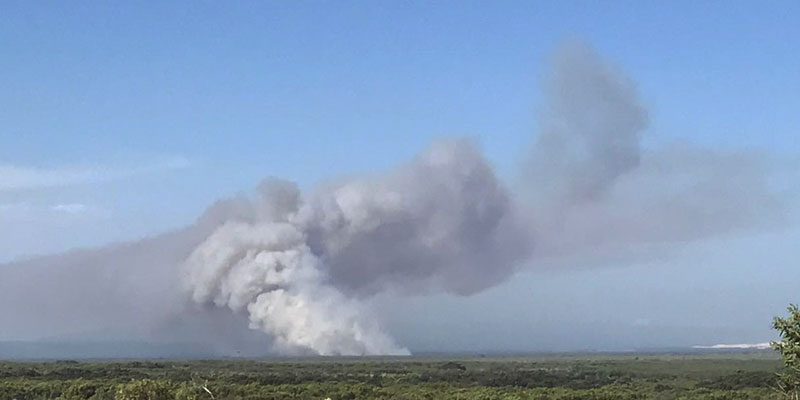 The Overberg region has been hard hit by three major fires since our previous report.  This report is for the period mid-January 2017 till end of February 2017.

The fire on the Denel Overberg Test Range started on Friday 24 February. The fire was ignited following standard missile testing on the test range. To date (Tuesday, 28 February), more than 13,000 hectares has burned.

According to Louise Wessels, Manager of the Greater Overberg Fire Protection Association (goFPA), the combination of strong winds and older vegetation made fire suppression difficult.

A small section of De Hoop Nature Reserve burned, while the fire threatened the historical Melkkamer farmstead on the reserve. “It was only due to the quick mobilization of the local goFPA Fire Management Unit, the land users, CapeNature the Fire Services and Working on Fire teams that the farmstead were protected.”

The left flank of the fire has also spread to threaten private land. Whilst the Fire-fighting teams focused on the main wildfire the land users were working together to ensure that prevention mechanisms in place under the leadership of the goFPA Fire Management Unit (FMU) Leader, Gert Aggenbach.

A fire was also burning on the Tradouw Pass, outside Barrydale, The fire is believed to have been started by a thunderstorm on Friday, 24 February. It threatened agricultural land and two homesteads, and to date has burned 10000 hectares.

Wessels said, “Good coordination between the Barrydale, Buffelsjag, Grootvadersbos FMUs, the local Farmer’s Association, the goFPA and fire-fighting services helped protect the infrastructure.” The fire has now spread over into the Suurbraak Nature Reserve, above the town of Suurbraak, but is not threatening infrastructure currently.

No arson suspected in Pringle Bay

The third fire destroyed one house and damaged three more houses in Pringle Bay. The fire started on municipal land on the mountains above Pringle Bay. No arson is suspected, but the source of the ignition is still under investigation. The fire destroyed approximately 100 hectares in a matter of 6 hours.

Wessels said, “We’ve learned a number of lessons from this fire. We know of the threats to property when the built environment and the natural surroundings are integrated. In this instance, the outcome was devastating. But we know when vegetation ends only a few metres from a property, rescue is not always possible.”

The goFPA actively brings private land users and fire-fighting services together, to coordinate fire suppression and to encourage better integrated fire management throughout the year across the Overberg.