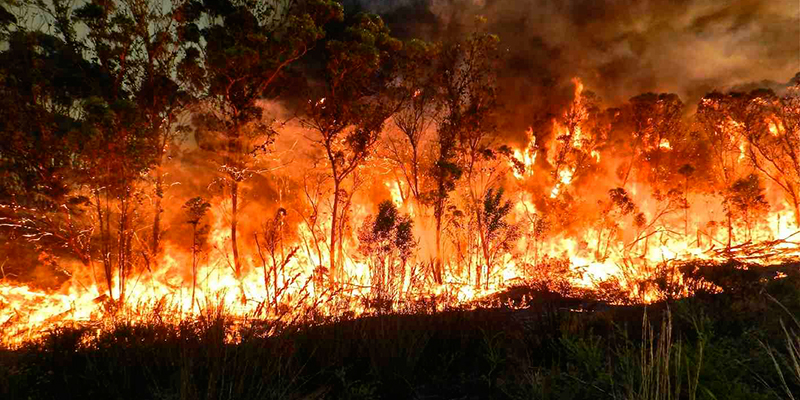 Fire is the most efficient way to clear a piece of land of vegetation and fynbos needs fire to regenerate.

So why not use fire for clearing unwanted plants such as invasive alien plants to allow fynbos to grow there? The answer is: yes, you can – and this is already happening in areas across the fynbos biome. However, there are a few things to consider before lighting the match.

Fynbos is a fire-adapted system that needs fire to regenerate and preserve its biodiversity. However to prevent the loss of species, fynbos needs to burn approximately every 12-20 years, while renosterveld needs to burn every 10-15 years, depending on their type and the rainfall. Fynbos burns naturally from mid-summer to early autumn; however, this is also the period with the highest fire danger weather conditions. Therefore to prevent runaway fire control burns should be conducted during the autumn. A cooler burn is also more beneficial for fynbos regeneration. It is advised to burn fynbos in reasonably sized patches to create a mosaic of different veld ages.

It is vital that a clear plan, based on the veld type, condition and species involved, is put in place prior to burning. This should also include the provision of sufficient finances for an extended follow-up period after the burn, which must be available before implementation of the plan.

A burn permit is required from the local fire brigade which, among others, requires a map of the area to be burnt as well as a guarantee of sufficient fire-fighting resources to put the fire out again. Neighbours, the Fire Brigade and other emergency services and the Fire Protection Association need to be notified in advance and again on the morning of the burn. Monitor the forecasted the Fire Danger Index (FDI) and calculate it on the morning using local readings and if the FDI is in the dangerous zone, the burn should be postponed.

The most common woody invasive alien plants in the fynbos biome burn differently to fynbos. They are Australian Acacia trees (Port Jackson Willow, Rooikraans, Black Wattle and other Wattle species), Myrtle (Myrtaceae) shrubs and trees including Gum trees (Eucalyptus), Hakeashrubs, and Pine trees (Pinus). These invasive alien plants are slow to ignite (dense stands can even act like a fire break), however, when they do burn they burn hotter and longer than fynbos, due to their larger biomass and the oils they produce. This means that the soil as well as the seeds it contains can be damaged causing reduced regeneration and an erosion risk, emphasising the importance of proper timing of the burn.

In conclusion, if done correctly, fire can be a very useful tool in the initial clearing of invasive alien plants and with that, securing the biodiversity and survival of the fynbos biome, while at the same time saving money on labour intensive invasive alien plant clearing.