Already 40 wildfires burn in the Overberg this fire season 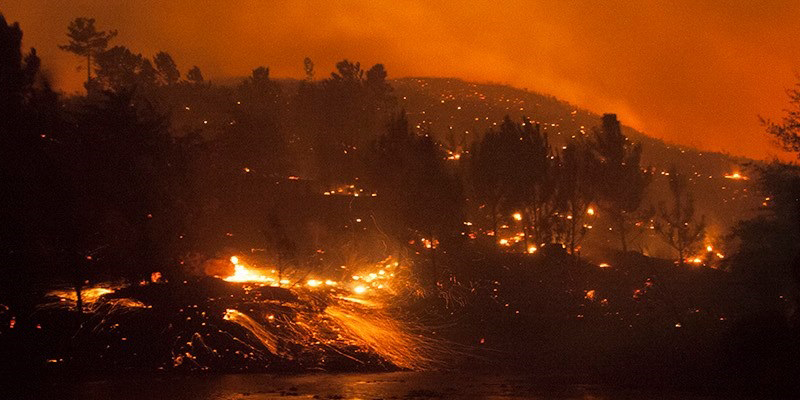 The Overberg fire-fighting teams have had to fight nearly 40 wildfires during the 2017/18 fire season to date.

The fire season officially started on 1 November 2017. Prior to the launch, fire officials warned that it was likely to be a busy season for wildfires, given the dry conditions in the region. 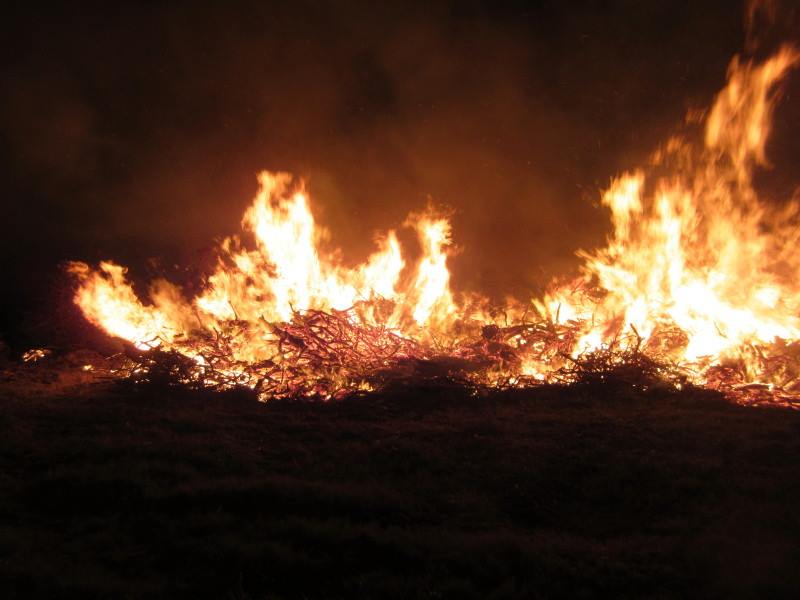 The first fire of the season started on a farm in Grabouw. The fire burnt a fuel load lying in the veld. The fire was put out a few hours later, thanks to the Fire Management Unit (FMU) leader, Andy Selfe, and with support from the farmer. 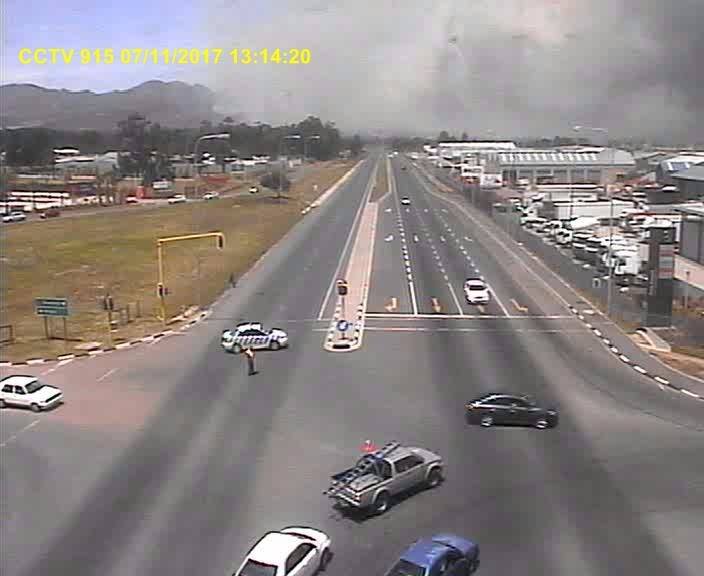 On 7 November, a major wildfire broke out on Sir Lowry’s Pass, burning on both sides of the N2. ODM Fire and Rescue teamed up with the City of Cape Town fire teams. By the following day, the N2 had been reopened, as the teams put out the final hot spots in plantations towards Steenbras. 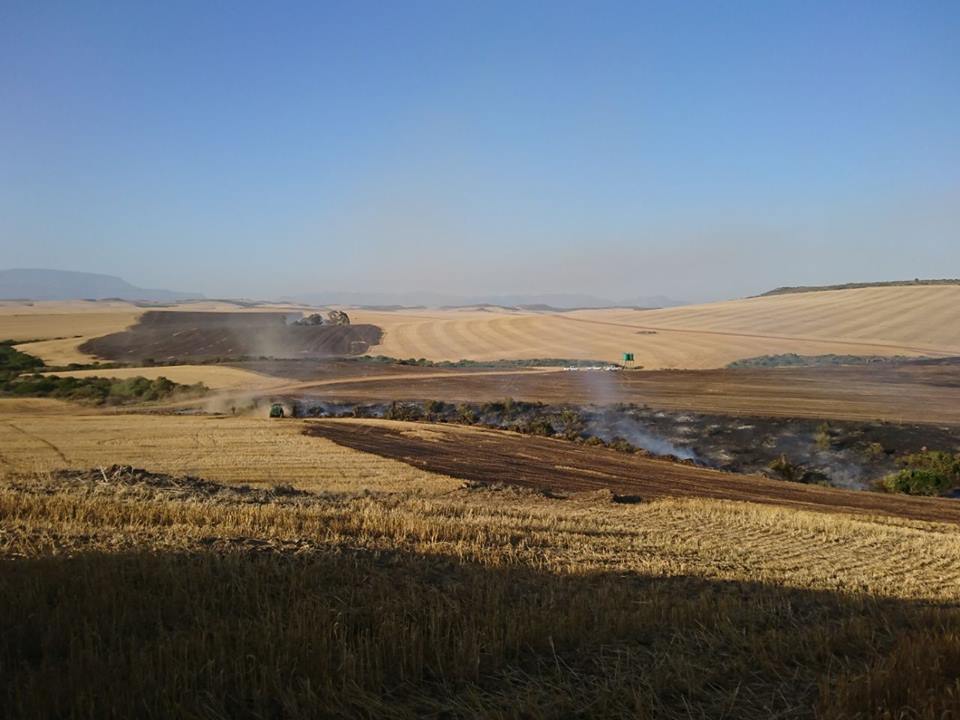 Swellendam experienced its first fire of the season on 11 November. The wildfire started in the DIPKA area. Landowners responded quickly with skid units, tractors and scrapers, supported by the ODM fire teams – and put out the fire a few hours later. 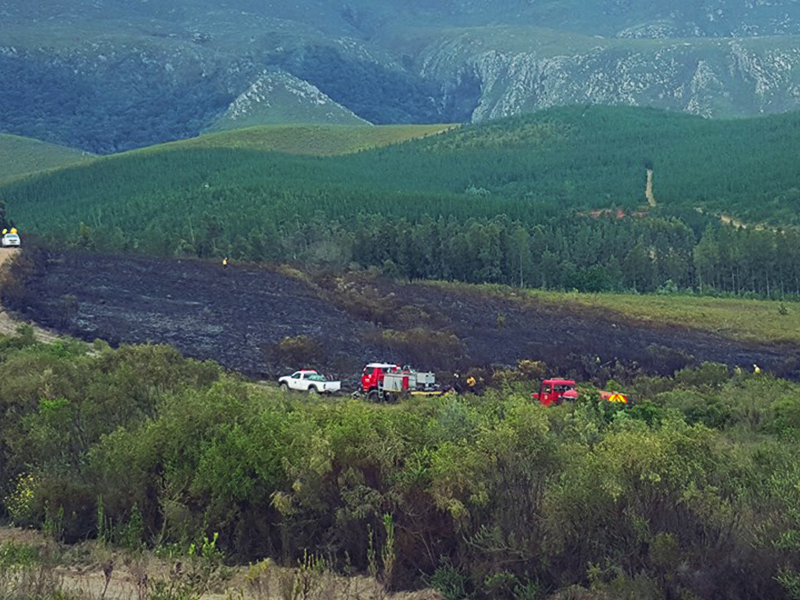 Another fire broke out outside Swellendam, in the Marloth Mountains on 28 November. The fire started below Cape Nature’s offices, and grew quickly as a result of strong winds. However, quick reaction from the FMU leader, Danie du Bruyn, ODM Fire and Rescue teams, CapeNature, Working on Fire and landowners ensured the fire was extinguished a few hours later. 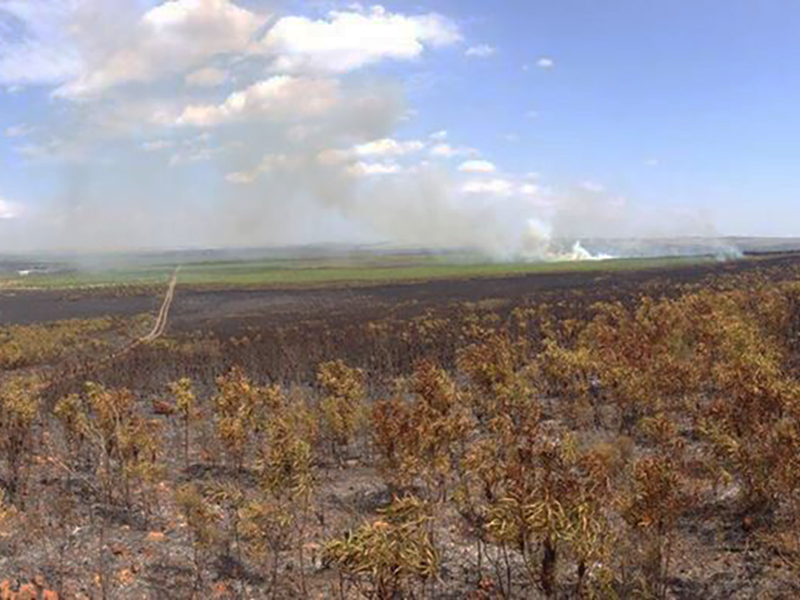 The Bontebok National Park, outside Swellendam, experienced a wildfire on 2 December. The fire was fanned by a south-westerly wind. ODM fire and Rescue and SANParks teams, as well as landowners, responded quickly, and managed to extinguish the fire soon after. 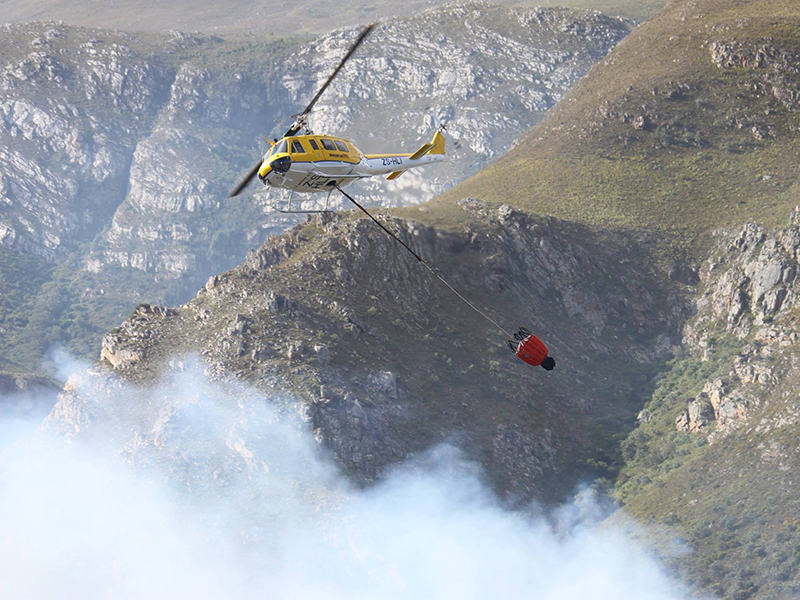 A dangerous fire broke out east of the Houwhoek Pass, close to Botriver, on 5 December. The fire headed towards the Groenlandberg Conservancy – an identified hotspot. While teams nearly brought the fire under control numerous times, the tough terrain hampered their efforts – in particular the burning trees that crashed to the earth. The fire was monitored over night, and finally contained. Photo credit: Reinhard Geldenhuys. 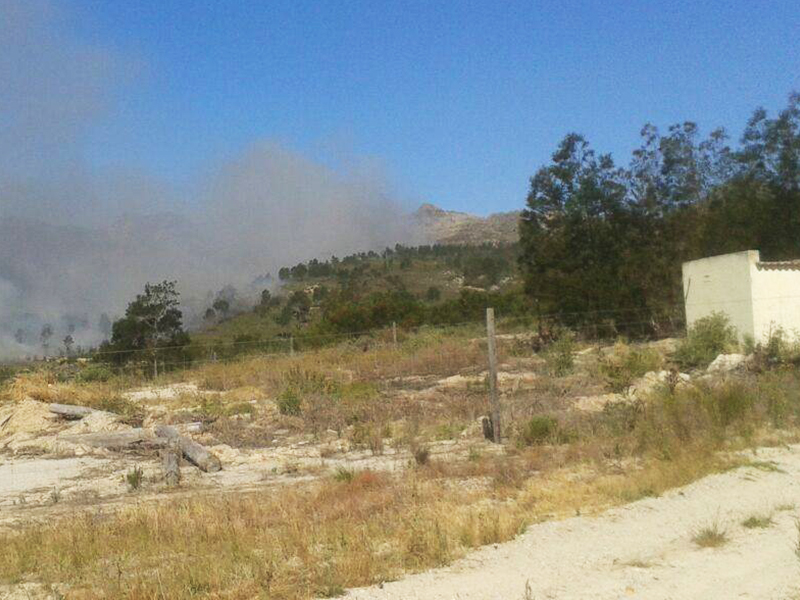 Two wildfires broke out on 7 December. A wildfire started at the Caledon rubbish dump. It was believed to have been a malicious ignition. Despite efforts to prevent the fire from spreading, it jumped the road and raged out of control before being contained.

A second fire started behind the Greyton Old Age Home. Burning in thick vegetation, teams struggled to control this fire. The following day, teams managed to contain the blaze, thanks to ODM Fire & Rescue, CapeNature, landowners and volunteer firefighters. Around 65 hectares burned. 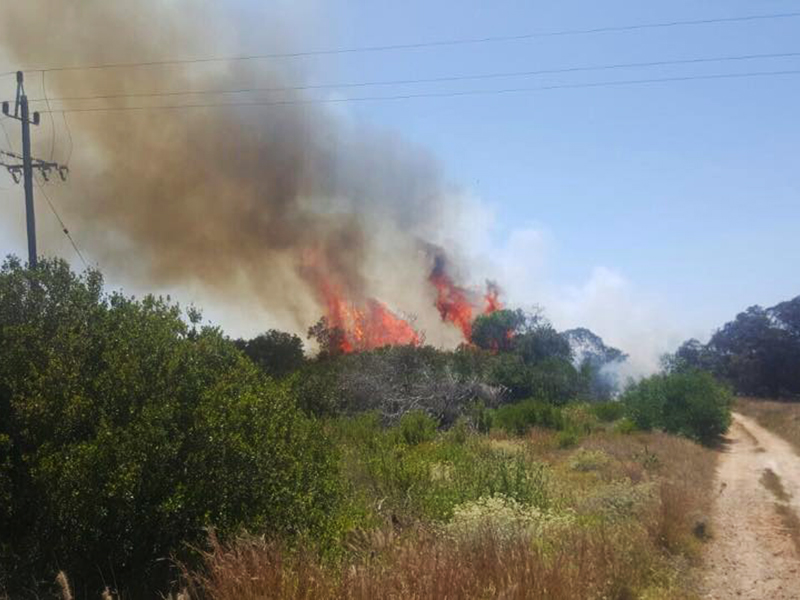 Just 3km south east of Bredasdorp, a fire broke out in an area covered by invasive species. Strong south-easterly winds and high temperatures fanned the flames. Landowners and ODM Fire and Rescue teams fought the fire together. At the time, affected roads were closed. The following day the fire was contained, with some 115 hectares burnt, including the Bredasdorp Golf Club greens. The teams were especially grateful to two primary school boys, Duncan Visagie and Danwill Tobias, who volunteered to rescue tortoises. 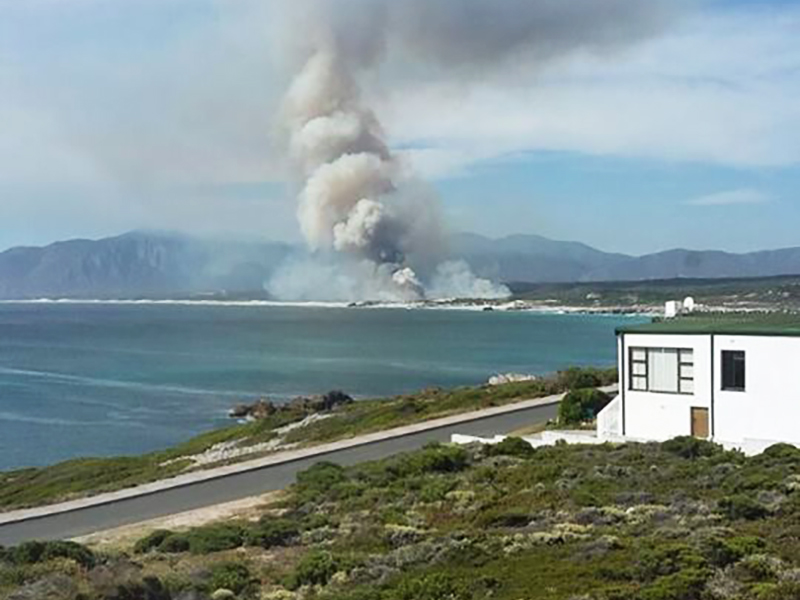 The Overstrand had its first fire on 15 December, when a wildfire was reported in the Walker Bay area. The fire burned in a terrain that was hard to reach. The teams fought throughout the night, and by the next day, mopping up operations started. Photos: Izelle Nieuwoudt. 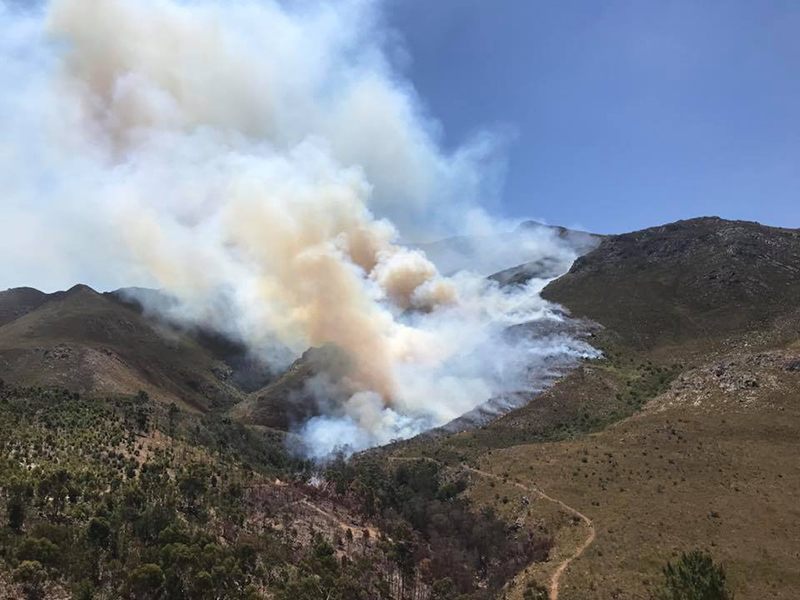 Teams fought a fire on the foothills of the Houwhoek peak on 30 December. The windy conditions and thick vegetation hampered their efforts. And a sizeable burn scar greater than 30 ha resulted. By the following day, the fire had been contained. 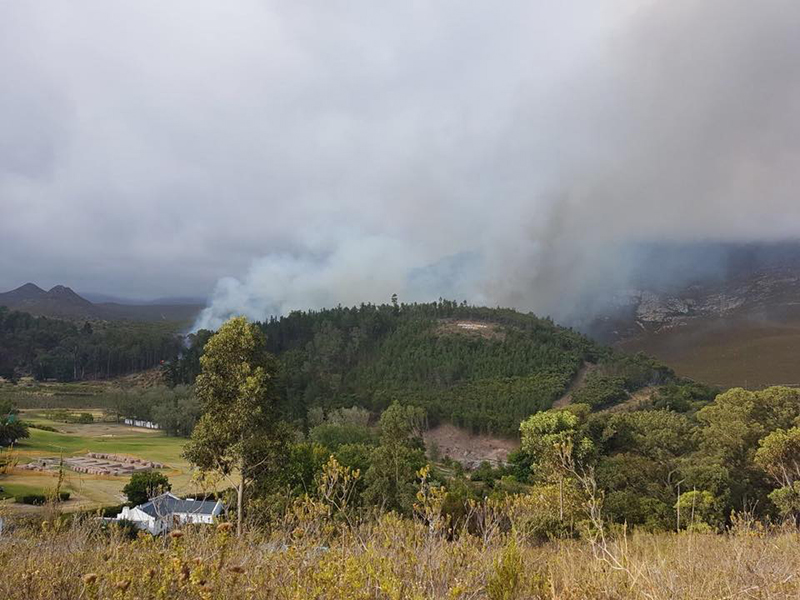 A few days later, a wildfire burned out of control from the Jakkelsrivier, between the Houwhoek Inn and the Wildekrans Country House. Aerial resources were activated, and joined by Working on Fire, NCC Environmental Services teams, CapeNature, Provincial Disaster Risk Management and ODM teams. A few hours later, the fire was declared contained, getting it out took a few days. 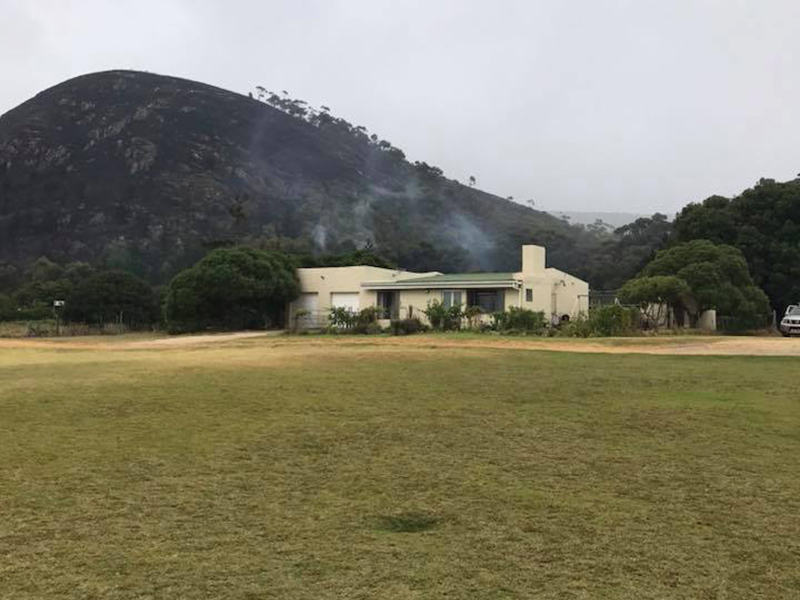 Holidaymakers in the Strandskloof Holiday Resort in the Overstrand were evacuated as a precaution on 7 January, when a fire broke out in the Baardskeerdersbos area. The fire spread from Uilenkraalsmond in a north easterly direction. By day 2, the fire was contained – thanks to the chopper and heli-tac teams. 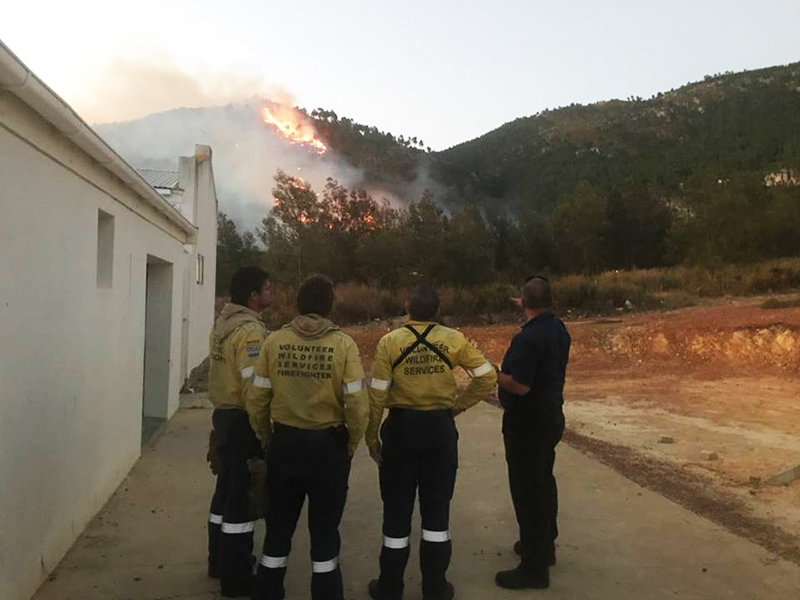 A wildfire started behind a church in Caledon on 10 January, and quickly headed up towards the mountains above Myddleton. Teams had to work hard to prevent the fire from spreading to Caledon. The fire burnt in steep slopes in difficult terrain, although it did not threaten property. By day 2, the fire still burnt, as flare-ups were experienced. 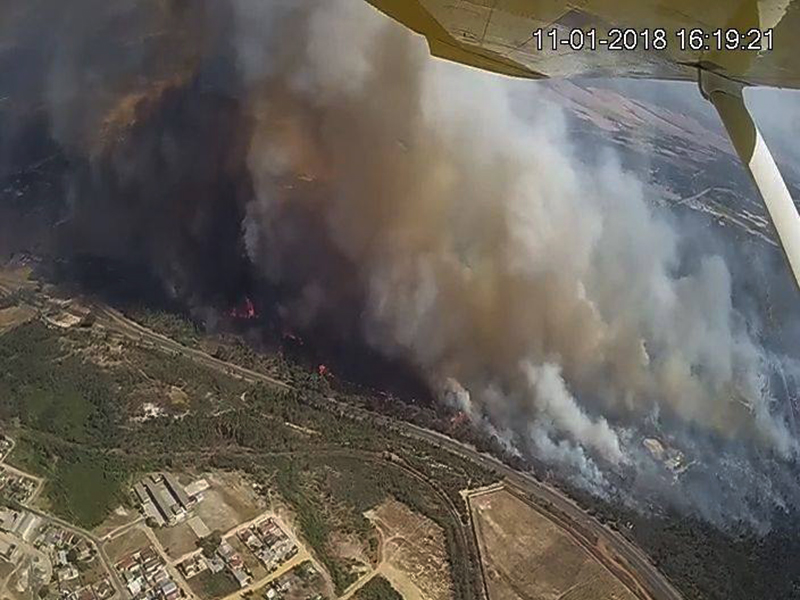 A fire also broke out close to Botriver on 11 January (one of four fires that started on this day). The N2 was closed as a result of the smoke. Choppers were used to protect infrastructure, but six people were treated by emergency personnel for smoke inhalation. Caledon and surrounding areas were without power, when this fire caused damage to power lines.

A wildfire burned above the town of Villiersdorp on 11 January. While land users and fire services fought to contain the spread, the fire still burned out of control 3 days later, with more than 60 firefighters on the line. More than 2500 hectares were destroyed during this fire.

4 FEB – R43 BETWEEN BOTRIVER AND KLEINMOND 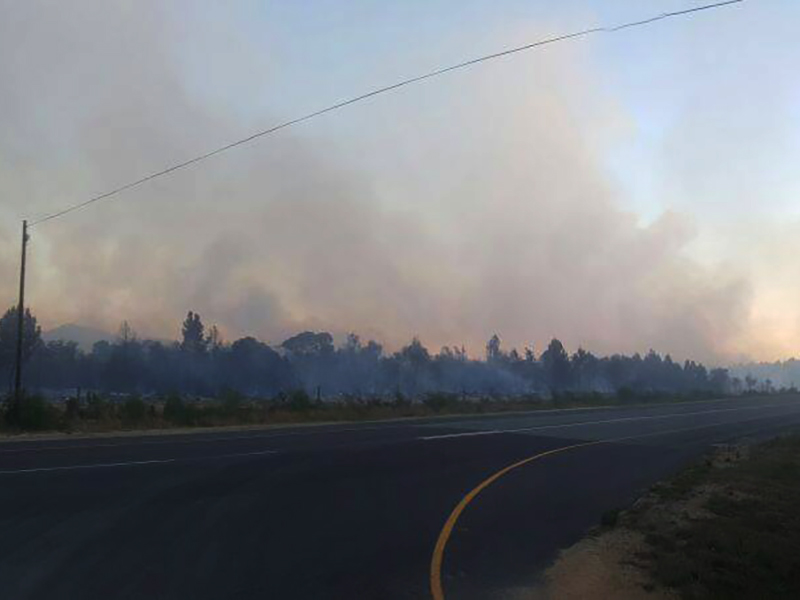 On 4 February, a fire spread into thick invasive alien vegetation next to the R43 between Botriver and Kleinmond. While the fire burned on both sides of the road, the eastern flank proved a challenge, given the thick vegetation. ODM Fire & Rescue, Overstrand Fire & Rescue, FMU leaders, landowners, Working on Fire aerial support and CapeNature teams came together to tackle this fire. By the following day, the fire still burned out of control when the wind changed direction. The teams managed to protect Ecology Lifestyle farm, but the fire spread onto Barton Vineyards and Villas, where aerial support was needed to protect property and livelihoods. The following day it spread in the opposite direction after a sudden wind change. By day 3, this fire was contained, after a number of challenging moments. 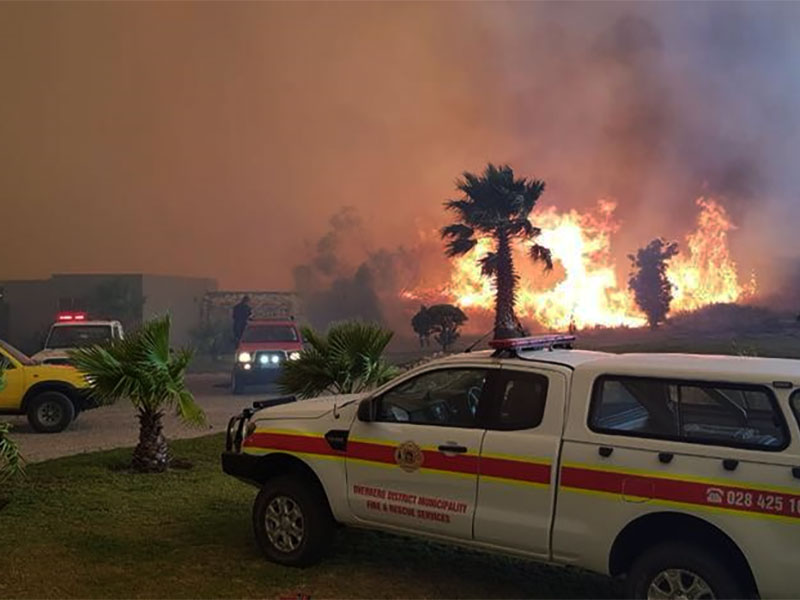 A wildfire, driven by extreme conditions, broke out in Pearly Beach on 2 March. Much of the fire suppression activities were focused on protecting infrastructure – with the town itself in the direct line of the fire. The R43 was closed due to low visibility. And it was only due to immense effort from fire-fighting teams and partners that no structures were lost. After two full days of fighting, the fire was finally largely contained, with mop-up operations continuing for a number of days afterwards. This fire showed the importance of partners: from the municipalities, the City of Cape Town, farmers, residents and of course the fire-fighting teams. 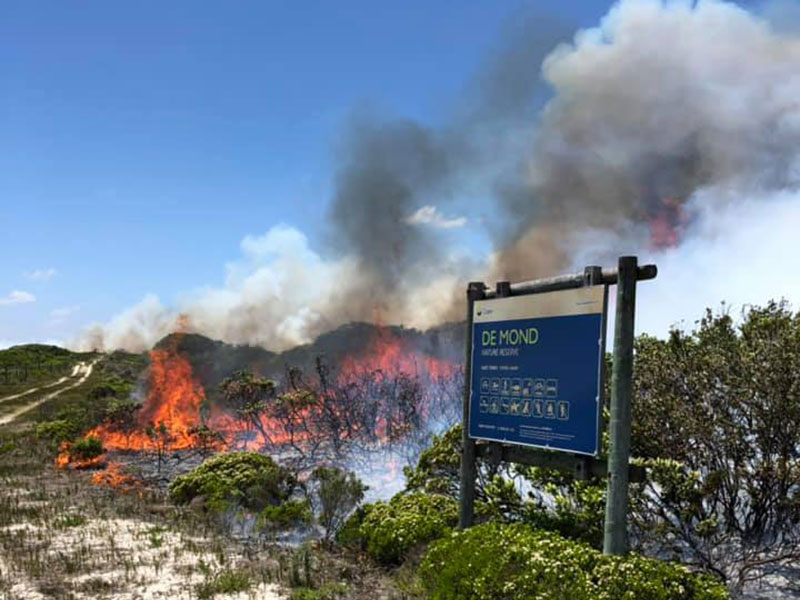 Around 4,500 hectares were destroyed, and one home and a store room were lost on a private nature reserve. The ignition of the fire is being investigated by the SAPS. 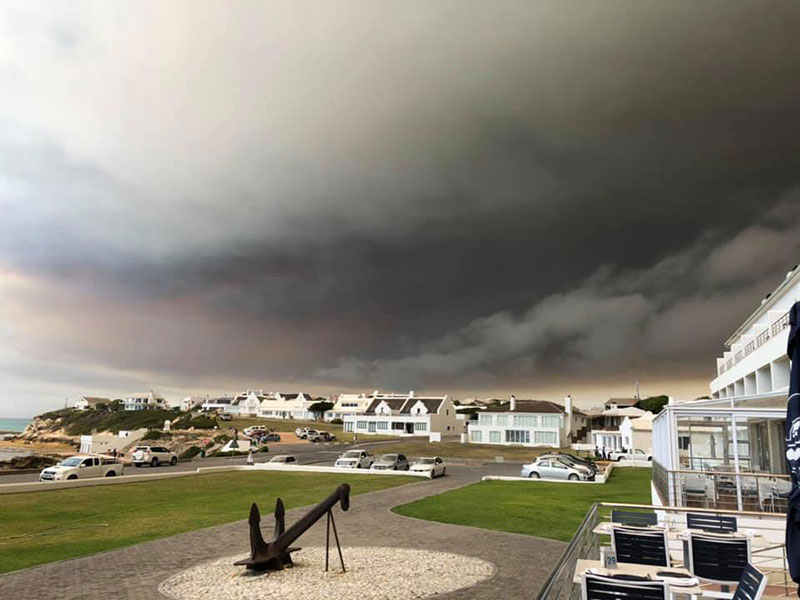 The Arniston wildfire started on the 12th of December 2018 and was declared out four days later. The ignition point was 3km west of Arniston and burned in a westerly direction (De Mond). This fire burned in dense mixed dune fynbos, alien vegetation, agricultural land, a protected nature reserve and within the urban area. Access was limited and proved to be a special concern for the safety of the fire fighters. This, the weather conditions and the fuel load made suppressing this fire difficult and necessitated large burnout operations. Aerial support was used extensively, but the support from the surrounding farmers must be highlighted. Special mention to the Cape Agulhas Municipality, the SAPS, SANDF and Overberg Test Range. 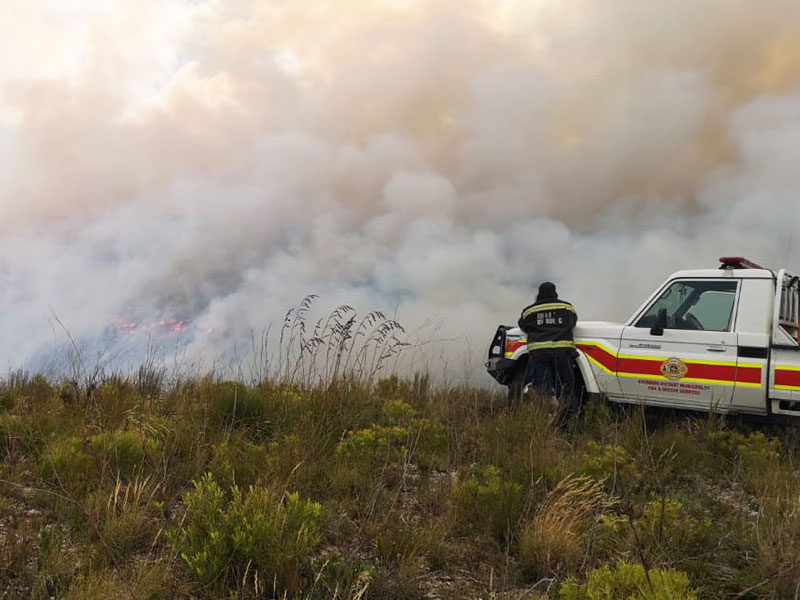 These fires burned for more than 10 days fire and around 3,500 hectares were burnt on the Cape Winelands side of the mountain, and a further 3,500 on the Overberg side. 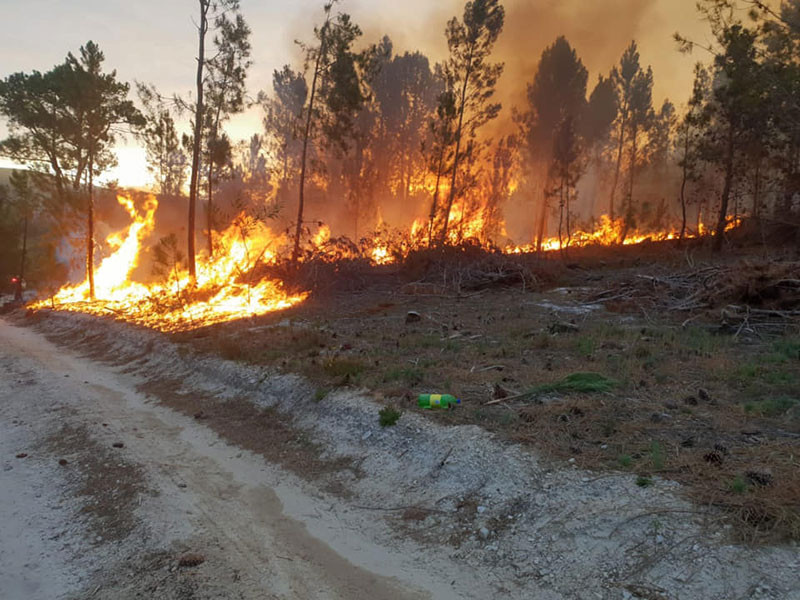 The Karwyderskraal fire started on the 13th and proved to be one of the large wildfires of the season. It lasted nearly two weeks and started up again during the Betty’s Bay Fire. This fire could have caused much more damaged were it not for the winter preparation and hard work of all the fire fighters (services and landowners). 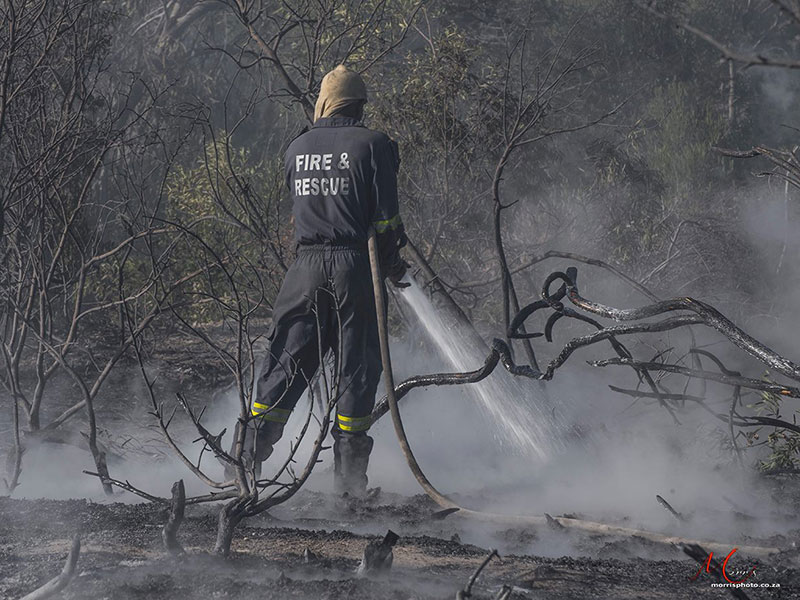 The focus was on structure protection. Image: David Morris 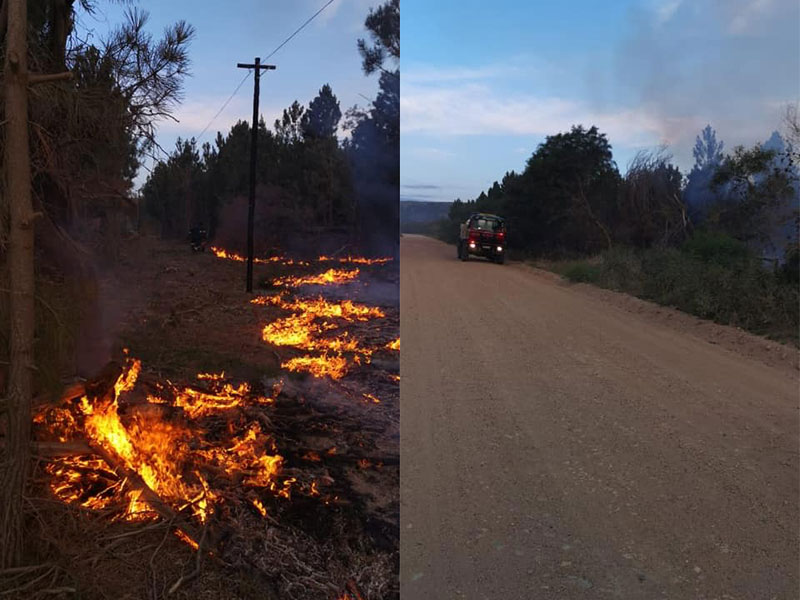 This fire was ignited by a brushcutter making a firebreak.